When you think of Stratford-upon-Avon, you think of Shakespeare’s Birthplace, Anne Hathaway’s Cottage, the RSC, swans and boating on the river, foreign tourists everywhere you look. However hidden away down the same street as the Bard’s first residence (in addition to the shop where I get my maps from) is a little gem in the form of the Mechanical Art and Design (MAD) Museum. Filled with lots of Heath Robinson type mechanical contraptions, one made entirely from kitchen implements along with other clever little items, it’s certainly a pleasant way to spend a couple of hours (especially when it’s raining outside!). Some are really rather ingenious, and take a while to work out exactly how they are doing what they are doing, but there are also enough that are just simply visually interesting to keep the kids happy too.

Here are a couple of examples, the one on the left the mechanism smooths a bed of sand and then leaves a message in it as it rotates. On the right one of the many ball mazes.

Also included, some classic examples such as the orrery below: 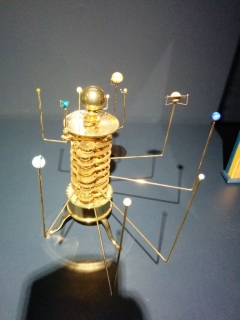 Of particular interest to me was the following homage to Eadweard Muybridge, photos from his classic horse racing series brought to life at the press of a button:

Of course, a trip to somewhere like this would not be complete without some toys to take back to my office, and there were a couple of six legged creatures from Kikkerland, designed by Chico Bicalho, that caught my eye. They both move through vibrations generated in two different ways so as an example of insect gaits are worse than useless, but are still worthy additions to my shelf miscellanee.

Finally, where to find it? The MAD Museum lives above the parade of shops on the way out to Shakespeare’s Birthplace, look to the right and there’s an entrance you could miss if not looking for it, up some stairs and then a surprisingly large installation (300 sq ft of floor space apparently). Well recommended.