Home Fun Through The Keyhole

We recently had a cameraman and interviewer coming round the department to film a new admissions video for us (will link to it here when it’s ready) and although I’d cleaned my blackboard especially it was decided that there were going to be too many blackboards in the film already and why not use my office shelves as a background. It wasn’t til after they’d gone that I realised this might not be such a good idea, had no idea what might be in shot. So, took a photo straight away to have a look. One thing led to another, procrastination took over, and the results are shared below. Amazing how much light one photo can shed on someone’s interests, it’s a real snapshot of my life! (despite the temptation to do move some stuff into shot).

Pan around to see zoomed image on right of picture, or click on highlighted areas for more information on what may or may not be particularly interesting. 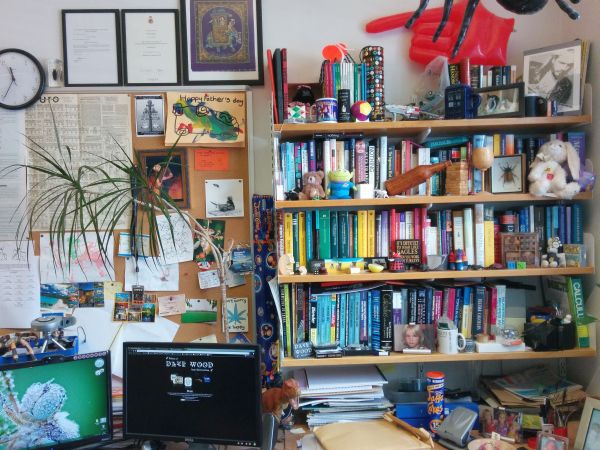 To put this corner into context, below is view of the office from the door (excuse the mess). I often get compliments that it is the most interesting office in the department, but it’s all really grown organically over the years as I’ve accumulated “stuff”. If I (probably) spend a majority of my waking hours in the office, then I like it to feel homely and inviting! Plus I’d never find room for it all at home. 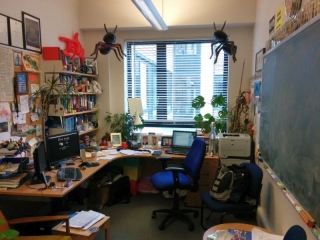 Actually, looking at this photo there’s some more interesting things in view (such as the coloured boxes under the desk which were props in an IATL funded project looking at Abstraction in Open Spaces with Jonny Heron), but enough is enough, I’ve wasted too much time already.

The Technical Bit: Panning widget uses Magic Zoom Plus from Magic Toolbox, but to create the clickable areas I first created an imagemap using Gimp and then used that to cut and paste in the attributes to the MagicZoomPlus “hotspots” facility.