So it looks like I’m “related” to Isaac Newton and Galileo Galilei (to go with my rather ordinary Erdös number of 4). The following graphic has been compiled using the Mathematics Genealogy Project hosted by North Dakota State University based on PhD. supervisors (although the further back you go I guess it gets a bit more vague than current practice). As much as I’d like to think this is something special, Newton has 11229 “descendants” and Galileo 11567, but hey, I still think it’s quite cool! A little alarming is another direct route from Mersenne, but I guess not all Number Theorists are bad. 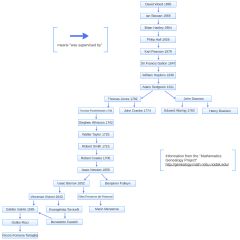