On 7th September 2012, the “master of the Sky Guitar” Uli Jon Roth played The Asylum, a new music venue near Birmingham city centre, as part of his UK “club” tour. More precisely the Asylum 2, a smaller venue upstairs to the main hall, an intimate setting that has a capacity of 100. This low key tour (continuing into November) is an amazing opportunity to see the maestro close up and personal, and does not disappoint.

As you would expect, a talented band has been assembled, a highlight of which (with no offence to the others) is the young Ali Clinton on guitar; I’d never heard of him before the gig, and at first sight you wonder why Uli has a youngster on stage, but any doubts are dispelled from the first notes, this is a young man with a future, keep an eye on him (Clinton has his own three piece, Brother, who are also well worth checking).

The setlist is a delight on the ears, and confirms why Uli is soon to celebrate 40 years in the music business. The staples are there, Catch Your Train, In Trance, We’ll Burn The Sky, Sails of Charon as well as the Hendrix covers and classical, including a wonderful rendition of Aranjuez during the jam (which was a personal request when I met up with Uli before the show, what a star!). The cover of Yesterday was also unexpected, but beautifully crafted. 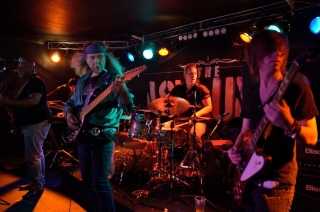 The only downside was that although a great little venue, it became very hot and sweaty, and the size made it difficult to hear the vocals (despite great efforts to rectify this during the soundcheck).

A nice rendition of Sails of Charon from an earlier date on this tour with the same band can be found on YouTube.

Uli and band tours the UK until the end of December, official tour dates.

Photos on this page by kind permission of Lloyd’s Photography who were taking photos for the whole evening, all rights reserved. They have a Facebook page from where they can be contacted.

Update: went to see the band again November 7th at Nuneaton’s Queen’s Hall. Despite a heavy cold, Uli again played an awesome set, albeit a little shorter than previously. I missed the first support band, but Brother then played a short set before Uli came on, which was unexpected but hugely enjoyable. These young chaps need to get a CD out!