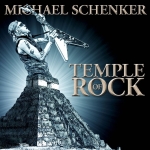 The first studio offering from Michael Schenker since 2009’s Midst of Beauty sees an album full of energy and Michael on top form. Advertised as a “Michael Schenker and friends” album, this is not another cover album such as Heavy Hitters or his collaborations with Siggi Schwarz or Davey Pattison, but more an MSG album with special guests, but backed up by a core band of Schenker, Michael Voss, Herman Rarebell, Pete Way and Wayne Findlay. Schenker’s personal ups and downs have been well documented, but this album screams of a guitarist at peace with himself, still at the top of his game, and out to have fun. Although Schenker has not been idle over the past few years, this album comes across as very similar in feel to 1996’s “Written in the Sand”, which was the last time MSG was “reborn” after the trials and tribulations of the UFO reunion (although we can forever be thankful for the awesome “Walk On Water” album). In fact “fun” is probably the word that best sums up these tracks: he is surrounded by top notch musicians, and while the lyrics can be a little weak in places, we are served up to good old fashioned rock and roll. In fact the tightness of the band, whoever is appearing at the time, amplifies the statement that this is no Michael Schenker and friends along for the ride, but a selection of full on MSG tracks where the change of personnel serves to keep each track fresh (no more so than “The End of an Era” where the drums from Carmine Appice are just stunning).

“How Long” appears in two versions, the second as a “3 generations guitar battle” with Leslie West and Michael Amott, but both versions are very catchy, but this is a description that can be applied to many of these tracks. You can always tell when an album hits the mark when you find yourself singing along to yourself all day after listening to it. It’s also always good to see Robin McAuley reunited with the band, I always felt the McAuley Schenker Group incarnation was always unfairly overlooked, and he appears on “Lover’s Sinfony” (although of course many of the old vocalists, including McAuley, appeared on 2006’s “Tales of Rock ‘n’ Roll”).

A review cannot be complete without at least a mention of the intro, by a certain William Shatner. At first it seems a bizarre and completely crazy thing to be on the album, but becomes a little more understandable when your tie it in with Schenker’s contribution to a track on Shatner’s recent album “Seeking Major Tom”.

So in summary, an unexpectedly solid, full on,  album after perhaps a few years of Schenker going through the motions, showcasing one of the most accomplished guitarists back at the top of his game backed up by a veritable embarrassment of riches in band members.