A continuing series of posts to highlight my small antique map collection. All scans are taken directly from an original copy, not a reproduction.

Map of Warwickshire from “The Parliamentary Gazetter of England and Wales” published by A. Fullerton and Co., 1848. From Berkshire Byways:

Gazetteers and popular atlases were a speciality of Fullerton & Co. The firm started in Glasgow, expanding to Edinburgh and London in 1843 and Dublin in 1845.

Between 1833 and 1837 they published the four volumes of James Bell’s “A New and Comprehensive Gazetteer of England and Wales”. It was illustrated with forty-four maps, including the individual English counties, each adorned with an attractive vignette view.

These were re-used in “The Parliamentary Gazetteer” about ten years later, updated only by the addition of the railway lines. However, the new Gazetteer was successful and ran to several editions in the 1840s.

Of particular mention is the engraving of two of the spires of Coventry in the upper right corner (Trinity and St. Michaels, engraved by “R. Scott”, possibly Robert Scott 1777-1841?). Also how impossibly small Birmingham still is, not being much larger than Coventry. 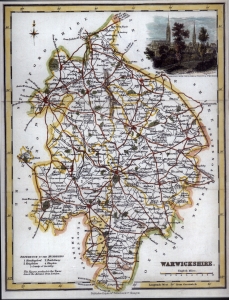