OK, actually the third post but the pun wouldn’t work otherwise! The larger stick insects have now been moved into a BSP cage (Small-Life Supplies) to give them more room to grow and a better environment, so that’s 15 moved into the BSP and a couple of first/second instars left in the jar to develop a bit more first and still a multitude of unhatched eggs in the other jar. As can be seen from the thumbnail their first reaction to being in a new airy, spacious mansion was to crowd together on one leaf but they have since spread out a lot more and are growing at a much faster rate than before. They have actually been in there for a week now and I gave it the first change of plants today which is a little more involved now, but as they get larger it will at least be easier and easier to spot them… if I haven’t already pointed it out, the biggest problem with stick insects is that, well, they look like sticks!

So here’s the cage in situ… also visible the unhatched eggs, I have found an old dilapidated laptop perfect to use as a stand: 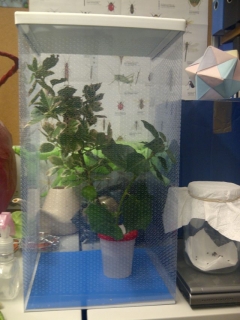 And here are a couple of shots of the insects inside, focusing becomes an issue when trying to do so through the perspex.

And finally a few to show current size of a representative insect:

Finally a detail of the first of the four images above: 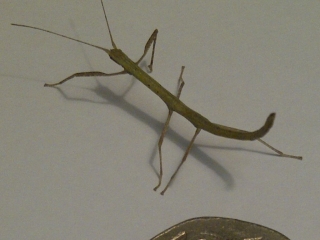